Drumroll please!! The winner of my contest is Linda Kish. Congrats, Linda!!!

Please email me at lambkassandra3@gmail.com to claim your prize. I will need your snail mail address and the name and inscription you want on the signed paperbacks. Thanks!!

Everyone else, stay tuned! I will be doing more contests, about every 4-6 weeks through the summer.

Hey folks, I’ve got a contest running through 5/20. Jump on over to that page and enter to win these swag goodies and signed paperbacks.

The contest page is password-protected because this contest is just for my true readers. The Password is KATE.

Prizes include a cute mug with a flow chart to decide if you need a new book (of course, you do!) and an 8gb flash drive.

Sign up for their authors’ newsletters and get 7 free stories!! (You can get my free ones as well, even if you are already on my newsletter list.)

It’s now available for preorder on Amazon, Kobo and Apple (links below) and will be available elsewhere soon. Release day is Oct. 27th!!! 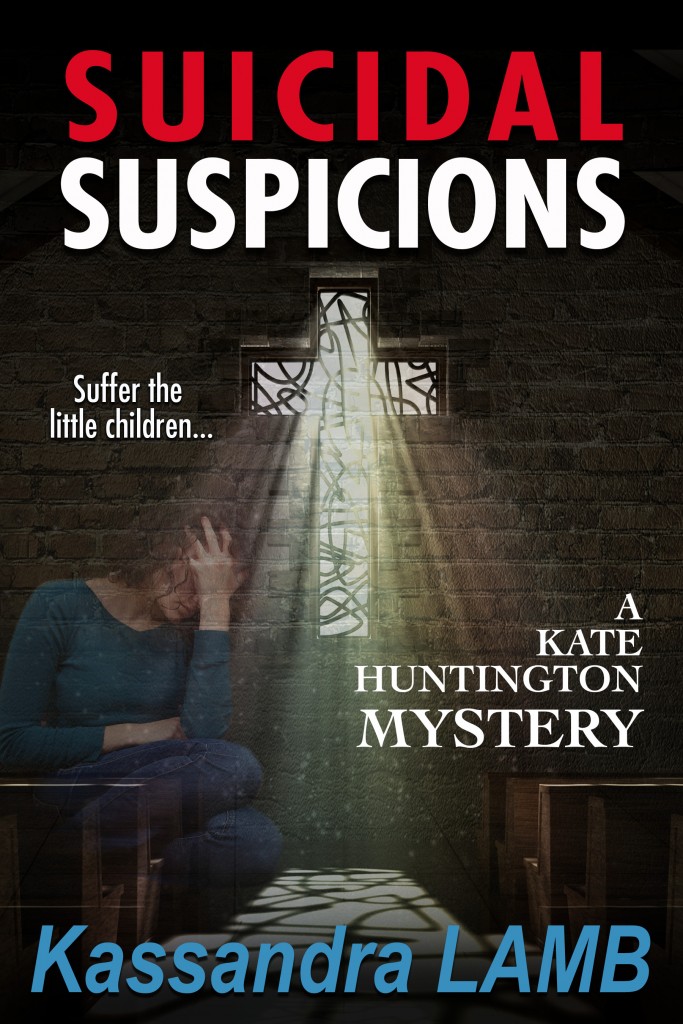 Psychotherapist Kate Huntington is rocked to the core when one of her clients commits suicide. How can this be? The woman, who suffered from bipolar disorder, had been swinging toward a manic state. The client’s family blames Kate and they’re threatening to sue for malpractice. She can’t fault them since she blames herself. How could she have missed the signs?

Searching for answers for herself and the grieving parents, Kate discovers some details that don’t quite fit. Is it possible the client didn’t take her own life, or is that just wishful thinking? Questioning her professional judgement, and at times her own sanity, she feels compelled to investigate. What she finds stirs up her old ambivalence about the Catholic Church. Is her client’s death somehow related to her childhood parish?

When she senses that someone is following her, she wonders if she is truly losing it. Or is she getting dangerously close to someone’s secrets?

Wanted to bring you all up to date on things.

First, if you haven’t already signed up for my newsletter, please do so at the top of the column on the right. You will receive a free e-book. Be sure to email me that you have signed up so I know to contact you about the book and the offer below (lambkassandra3@gmail.com).

Also, you will get a special offer for discounted, signed paperbacks after emailing me to tell me that you have signed up. 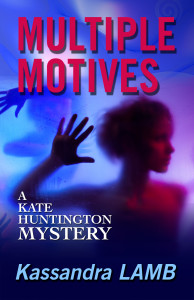 Second, a reminder that Multiple Motives is perma-free now on Amazon and most other retailers:  AMAZON   KOBO   APPLE

And third, an update on the next Kate on Vacation novella, Ten-Gallon Tensions in Texas. It is on schedule to be released mid to late March. Cover reveal soon!!

As always, thanks so much for all your support! 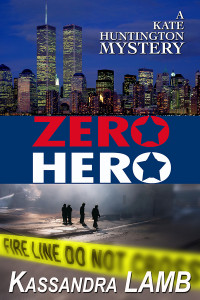 Official Launch of CELEBRITY STATUS — We’re Having a Blast (and a Contest!)

CONGRATULATIONS to Erika Meyer who won my Book Blast Prize package! It will be coming your way soon, Erika.

It is finally the official Launch Day for CELEBRITY STATUS, and we are blasting, blogging and giving away goodies. 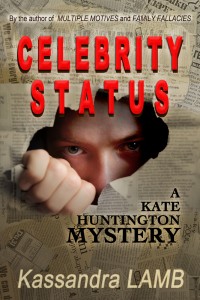 FIRST, Promotional Book Tours is doing a Book Blast for me, sponsoring my book on 50 blogs over the next two weeks and running a contest (see details below on how to win goodies; every person who enters gets a free e-book copy of Multiple Motives).

SECOND, in honor of the book’s launch, I’ve posted a somewhat tongue-in-cheek post over on the misterio press site  on The History of Emotions.  Hop over there and check it out! 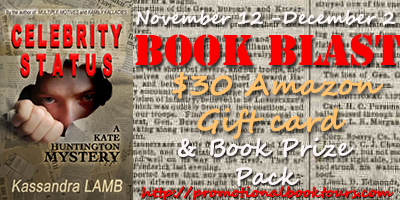 Kate is now married to Skip Canfield, the man who patiently courted her through the last two books in this mystery series, and life is good. Skip’s private investigating agency, Canfield and Hernandez, may be doing a little too well, however. They have attracted their first celebrity client, a pop singer whose anonymous stalker has a twisted concept of love. Before Skip realizes just how twisted, he involves first his psychotherapist wife and then their lawyer friend, Rob Franklin, in the case.

Soon they are being hounded by paparazzi and someone is planting evidence to convince Skip that Kate and Rob are lovers. As they try to protect their relationship and family from this onslaught of unwanted attention, as well as a stalker who will stop at  nothing to remove the obstacles in his path, Kate and Skip struggle with the reality that you can’t always keep those you love from harm.

Writing and psychology have always vied for number one on Kassandra Lamb’s Greatest Passions list. In her youth, she had to make a decision between writing and paying the bills. Partial to electricity and food, she studied psychology. Now retired from a career as a psychotherapist and college professor, she spends most of her time in an alternate universe in which her protagonist, Kate Huntington, is always the kind, generous and insightful person that Kass wishes she was herself.

When not at her computer, transported in mind and spirit into Kate’s world, Kass lives in Florida and Maryland, with her husband and her Alaskan Husky, Amelia. She also hangs out a lot on Twitter and Facebook, so feel free to track her down there.

The author will be giving away a $30 gift certificate from Amazon, a signed paperback copy of her latest book, Celebrity Status, and EVERY person that enters the contest will get an ebook of the first book in the series, Multiple Motives

Ends 12/2 Fill out the form to participate