This is the perfect time of year to pour yourself a cup of tea, coffee or hot chocolate and curl up with one or more of these Rad Reads!

(Since several books I’ve read lately I did not consider worthy of recommending, I’m going back to some earlier reads for the first of the reviews below.) 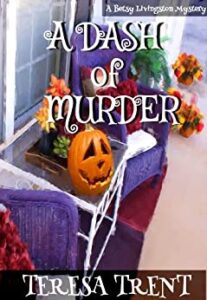 I read this book 9 years ago and have since read the entire series. I enjoyed them very much, especially the characters—just quirky enough to be interesting but still believable. Betsy Livingston is “The Happy Hinter,” a columnist for the local newspaper, and an amateur sleuth (much to the chagrin of her police lieutenant father).

In this short but fun first installment in the series, Betsy’s Aunt Maggie drags her along on a ghost hunting tour of a local abandoned hospital. And Betsy’s sleuthing avocation is launched when she stumbles on a “fresh spirit,” i.e. a corpse.

Aunt Maggie is a hoot and I also love the portrayal of Maggie’s son, a young man with Downs’ Syndrome. The author develops the characters and the setting, a small town in Texas, with just the right amount of detail to bring them to life, but without slowing down the story.

I give A Dash of Murder, and the whole series, 4 ½ fingerprints. 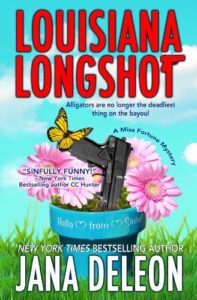 First, let me say that I totally enjoyed this book, once I got past what the main character did for a living. Then a bit later on, I hit a couple of other bumps. More on that in a moment.

I was a bit taken aback when the MC of a mystery billed as a cozy is a CIA assassin…doesn’t quite fit with the normal cozy tropes. But the book has thousands of ratings and a 4.5 star average, so I forged ahead.

The story is great and the characters and town are well developed. I particularly got a kick out of the Geritol Mafia, several little old ladies who look so sweet, but they have pasts, and skills, that give even a CIA operative pause.

And of course there’s a sexy sheriff, with whom the MC locks horns over her and the little old ladies poking their noses into his investigation.

But again, I was a bit jarred when I encountered the first cuss word (there were several), and things got a bit gory toward the end.

Not that I personally object to any of that, but it breaks several rules regarding cozies. For that reason, I’m only giving Louisiana Longshot 4 fingerprints. Without those jarring moments, it would’ve gotten 4 ½ or maybe even 5. But now that I know what to expect, I probably will read more in this series. 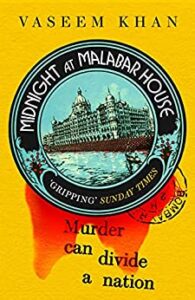 I don’t read as much historical fiction as I once did, but when I do, I expect to be educated, in a pleasant way, about the location and era where and when the story is set. Vaseem Khan does not disappoint.

I loved learning about the intricacies of India’s politics and society as the infant country begins its first full decade of independence from Great Britain, in 1950.

And the author’s premise is intriguing. The main character is Persis Wadia, the country’s first female police detective. When she is handed a sensitive, and sensational, case—the murder of a British diplomat—she must not only sort out a complicated crime, but also overcome the prejudices of others, including some of her fellow officers.

The info about India’s history, culture and social structure was seamlessly woven into the storyline, as we follow Persis on the twisted trail that eventually leads to the killer. She is helped along the way by a British criminalist, Archie Blackfinch.

My complaints about this story are minor. There are a lot of characters to keep track of, and sometimes not a lot distinguishing them from one another. I had a little trouble relating to Archie. My impression was more bumbling sidekick, but then later in the story there are hints of something else…I won’t say more for fear of spoilers. But I found myself scratching my head, thinking, “Why did that go in that direction?”

I could certainly relate to Persis though, and her struggles to be accepted and respected in a male-dominated world. But I would’ve liked to know more about her motivation for becoming a police officer; that part of her back story was not nearly as well developed as her family background was.

But despite these minor drawbacks, this was a very satisfying story. I give Midnight at Malabar House 4 ½ fingerprints.

That’s it for this time around. Happy reading!!