A New Book! Lord of the Fleas ~ Preorder Now

I’ve got a new book for you! Here’s the adorable cover.

Just $2.99 during the preorder period (will go up after release on May 26th) 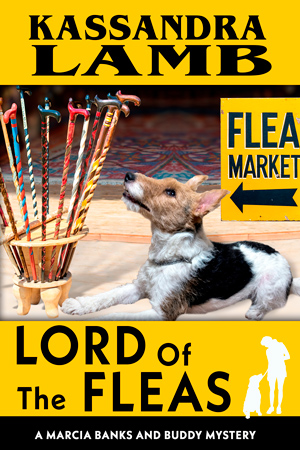 Lord of the Fleas, A Marcia Banks and Buddy Mystery, #9

What could be more innocent than a country flea market?

When service dog trainer Marcia Banks takes up temporary residence with her best friend in Williston, Florida, her goals are simple: spoil her toddler godchildren and train her newest dog’s veteran owner, a vendor at a local flea market.

Ha, the universe has other plans. When the owner of the flea market is found dead and her client is a prime suspect, she discovers that nothing is as it seems—from the flea market owner himself, to the ornate dragonhead cane he gave to her client, to the beautiful but not very bright young woman whom her client has a crush on.

The only true innocent in the bunch seems to be her guileless, partially paralyzed client. But when he shares a confidence that puts her in a double bind with local law enforcement, she’s not sure she can even trust him.

Despite her promises to her new husband, the only way out of her no-win dilemma seems to be to find the real killer. The flea market, however, is hiding more secrets, and at least one of them could be deadly.

Available for Preorder at these retailers ~ $2.99 during preorder period; goes up to $4.99 after release on May 26th!